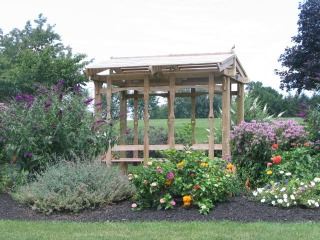 
All playground equipment is OPEN, but use at your own risk.
There is no winter maintenance in the park while it's closed.
Restrooms are now CLOSED for the season.

Reservations for 2023 can be made by calling the Township 717-274-0481 after January 2, 2023.
Click on Pavilions for information about reserving pavilions, including a map of the park.

There are 8 pavilions located throughout the Park. Each pavilion holds around 80 people and has a charcoal grill. Pavilions may be used Monday through Friday without reservations. However, on weekends and holidays, reservations are required. Reservations may be made for weekdays if you need to be guaranteed of the availability of a certain pavilion. Reservation fees are as follows:

North and Pines Pavilions (without electric):

Please keep in mind that for the safety of everyone using the park open fires and alcoholic beverages are prohibited. Also, no pets are permitted in the Park. All motor vehicles must be kept in the parking areas, except Park or Police vehicles. Discharging of firearms or the firing of rockets are prohibited. And motorized or radio controlled devices are not permitted. Read all the Park Rules here.

Click here to view a basic map of the Park. The address of the park for location purposes only is 1100 S. Lincoln Avenue.

On April 20, 2002, the Park dedicated a new sign which  was provided by Linda Krall in memory of her parents, Alfred and Betty Fernsler. The Fernsler's farm was one of the five (5) originally purchased for the Veterans Administration Hospital and eventually turned over to the township for a public park.

In 2008 Park employees installed a memorial pergola which provides a beautiful place for visitors to sit and enjoy the park. There are 8 picnic tables and 33 benches installed around the walking/biking path. These tables are available at all times on a first come, first serve basis.

In 2011, a memorial garden was placed near the football field by the Krause family in honor of Paul "Punch" Krause who served many years as a Supervisor of South Lebanon Township and was very passionate about having a community park. His efforts resulted in the purchase of land for South Hills Park. Punch was also involved with the Friendship Fire Company.

A 36 hole disc golf course was installed at the Park in 2013. During the 2014 season, we renovated the Fitness Center.

In 2016, a climbing playground was added near the sandbox.

In 2017, a new Tot Lot playground was installed near the tennis courts and the Pines pavilion.

In 2019, Chris Black planted dozens of trees in honor of his brother who passed away.
November 23, 2019: WGAL did a news article about this.

Home
Contact Us ®
Recycling
Notify Me - Alerts®
Report a Concern
[]